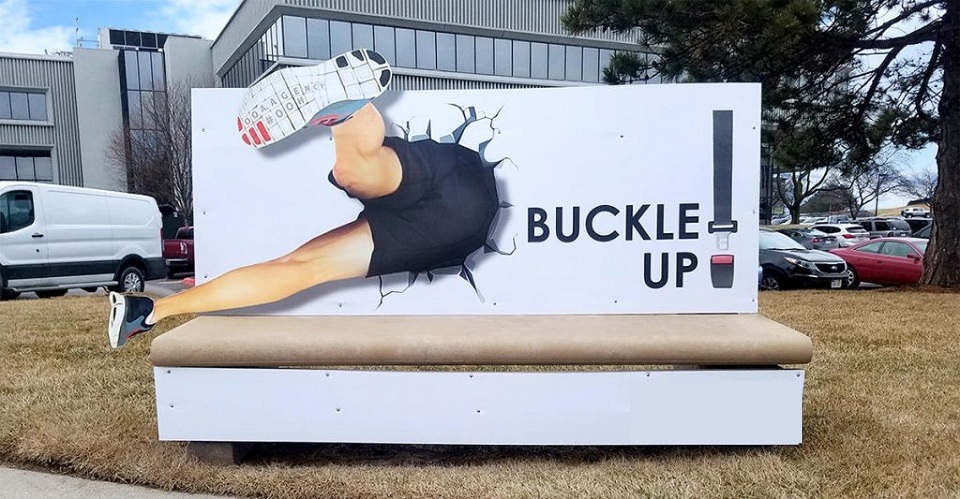 Now, when the spring has just begun, and it snows and rains at the same time, banners devoted to road safety are on top of the agenda. Such OOH advertisements warn drivers to be careful while driving, to fasten their seatbelts, not to use their cell phones while driving, and not to drive after drinking alcohol.

Here are 6 examples of nifty social ads that some creatives might want to look up to.

Police precinct in Elm Grove, USA, came up with a simple but quite efficient idea. They put up a digital meter on one of the highways that showed quantity of days in hospital according to the speed of the car.

2. It is all about dimensions

Australian agency BBDO created a masterpiece by adding 3rd dimension to a usual flat billboard. They showed the risks of driving in the back seat unfastened by putting up a giant slingshot that seemed to be ready to shoot the guy from the billboard straight out of this world. The slogan read: “The back seat’s no safer. Belt up.”

Highway  patrol in Colorado, USA, held a campaign to urge drivers to keep safe distance from other cars. They put up an unusual billboard with cars drawn on it, which was crumpled in the middle to simulate a crash. It clearly showed the consequences of tailgating.

Another outstanding and eye-catching advertisement from Colorado patrol was also aimed at tailgating. The advertisement consisted of two parts: one billboard with a car all in one piece and another one where it turns into a convertible after crashing into a truck.

5. Remember about the most important things

Creatives from New Zealand found a way to fight speeding on highways. A team from Saatchi & Saatchi New Zealand put up billboards with touching photos from a family album along a highway nearby Helensville. We all have this kind of photos: childhood photos, prom, sports events, wedding, family celebrations. The billboards were located close to each other so that they seemed like flashes to those who were going over 100 km/h. And at the end of the “album” there was a slogan that read: “Don’t let your life flash by. Slow down.”

In 2013 drivers of New-Mexico, USA, were shocked by the advertisement which was no more than a blank white billboard with a human body sticking out of it. The ad was put up by Department of Transportation of New Mexico, and the body sticking out of the billboard was, of course, a mannequin. The main idea that this ad was to communicate to drivers was written in the corner of the billboard: “Fasten your seatbelt”.